The new owners of The Berkshire Eagle have begun to experiment with non-print methods to understand and lead the region, and on July 28 they called on a world-famous musician to conduct in a different medium — conversation about the region, its magic and its challenges. 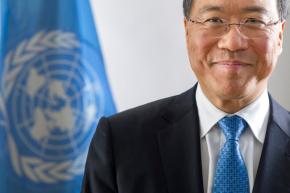 Cellist Yo-Yo Ma, a part-time Berkshires resident and Boston Symphony Orchestra collaborator, joined Chicago Symphony Orchestra veteran Gerard McBurney to facilitate an hour-long evening discussion among some 70 people. They were invited by the paper to the patio of Seranak, the BSO-owned former estate of Serge Koussevitzky which overlooks the Stockbridge Bowl.

Ma and McBurney shared microphones with about a dozen audience members who were invited — or offered — to share reactions to Ma’s convening question: “If you had one wish to change something what would it be?” Ma asked later about the possibility of “banding together to do something that we share in common.”

For his part, Ma talked about the need to turn young kids away from feelings of despair and instead, “hyped up to do things that matter.” He spoke of the Boston Symphony Orchestra and The Berkshire Eagle as “strong community anchors.” And he said visitors, artists and residents “are inspired by the land.” But Ma also said “we live in a bubble.”

McBurney spoke of the Berkshire landscape. “[It] seems to me [it] is critical. It affects everything that you do here.” He said: “Hundreds and hundreds of creative acts have taken place in this place” — beyond the arts alone, including in mining, farming and industry. The Massachusetts Museum of Contemporary Art in North Adams is an industrial landscape, too, he said, contributing to “threads floating like gossamers in the air — rooted in something I can’t put my finger on . . . things flow into this landscape . . . [to create] a spiritual space that is larger than us.”

For this reason, McBurney said, “:works need to reflect what is around us . . . the land is an important step in joining together what people do.” He added a few minutes later: “The place and the community has something very precious to offer the rest of the world . . . the cultural mesh of this place, placed within these cauldron-like valleys . . . is really special.”

Hans Morris (Berkshire Eagle co-owner and chairman of the MassMoCA board) took the microphone with his idea for change: “Make transportation easier for young people.”

Said Laurie Norton Moffatt, director and CEO of the Norman Rockwell Museum: “Why is this a place of opportunity for visitors, but so few of our young people see an opportunity and a future?” She said the joy of the Berkshires “is not universally shared.”

Nancy Fitzpatrick, Red Lion Inn owner, observed: “Right now, I’m kind of fixated on Pittsfield . . . I really feel it needs to be a fabulous little city.” She said it “is where a lot of our disadvantaged people live” and folks need to be more aware of “the hurt and suffering and needs in our small city.”

Phil Deely, an educator, philanthropist and multi-generational Berkshires descendant, called for less parochialism and regionalism. He cited “difficulty of coordinating and communicating” and said he “hoped to see The Eagle be a major resource to leverage a view of the Berkshires as the Berkshires.” The region has changed over his life, said Deely, from primary residents to an abundance of second-home owners. Yet the changed context still makes “unbelievable resources available to us,” he said.

Williamstown-native Chris Parkinson, age 30, and his partner, Tessa Kelly — architects who recently moved to Becket from New Haven — described their grant-funded project   to create five mobile writer studios that will support writer-in-residence programs. The studios are under construction and will debut in July, 2017. Parkinson called the Berkshires “a place of hope and not an altogether negative place.”

Berkshire Eagle co-owner Robert G. Wilmers, a Buffalo, N.Y., bank CEO who has maintained a residence in Stockbridge for decades, compared Pittsfield to Buffalo.   He echoed Ma’s comment about a bubble, saying Buffalo is the third-poorest city in America. “When you wander around Pittsfield, there are a lot of similarities,” he said.

He cited Pittsfield’s struggle with opioid abuse — common to many American cities . . . youth who aren’t sure what to do . . . and a “them vs. us” mentality. “These are big problems and we don’t have all the answers,” he said. But he said he hoped The Eagle as a “community paper, will articulate these problems and discuss them on a regular basis and I hope we can do something about them.”

Chef, community activist and NAACP chapter president Dennis Powell decried a conceptual wall that he said exists at the boundary between Pittsfield with Lenox   — “the Guido’s line” he termed it, after the specialty market at Routes 7-20 on the Pittsfield-Lenox Road — south of which the effect of the second-home market implies arts-and-culture-driven prosperity. He called Pittsfield “a young community and a hurting community” and said open hearts, open minds and an inclusive approach are needed. He said it is time to “look at what is going on” and “stop hiding” and “treat everybody as a human.”

“There are no gated communities,” said Powell. “When you ignore the problems of today, they are going to be at your gate.”

Powell called to the power of music as a means of personal development, “to develop the human being.”   For youth at risk, he said, “[if] you present the right setting, give the right message, you don’t have to worry about the behavior.” He added: “It’s opportunity that makes us achieve.”

McBurney said he was moved by what Powell had said. “These mountains are not prejudiced,” he said, urging efforts to “get people connected [and] back to nature.” He called for efforts to “conserve and develop.”

Powell’s theme of the uplifting power of music was echoed by Warren Dews, The Eagle‘s vice president of audience development, who declared: “Music saved my life.”   He said: “Music, and culture and acting — that’s what we need to capitalize on.” Dews said he sits on “several sides of the tracks” but from those vantage points, he “sees a new vision for our people.”   He expressed appreciation for The Eagle’s new ownership, declaring: “It’s like we hit the lotto — not the paper — but the community.”

Fred Rutberg, a retired district-court judge who championed the April local purchase of The Eagle and now serves as president of its corporate parent, termed the gathering a “thrilling moment.” He said there is magic in the Berkshires and the paper’s owners and employees are “looking for ways to unlock that magic . . . to try to take care of some of the issues . . . to try to make this a lot better place to live.”

Of the paper, he said, “I think we can help, we can be a catalyst, to be connectors.” He asked: “What makes the Berkshires a place of creativity?”